The Hajj Registration 2023 is to be started by the Haj Committee of India soon. The official dates are not announced yet but it is likely to be announced in the upcoming days.

The Indian Citizens of the Islamic Religion who are waiting for their turn to pay a visit as pilgrims for the Hajj to Mecca need to register themselves with the committee. The Hajj registrations will be furnished online on the website of the committee which is hajcommittee.gov.in. The Haj Committee of India administers all processes of the registered pilgrimage.

One of the duties of one who follows Islam is to pay a pilgrimage to the “Kaaba”, in the sacred city of Mecca in Saudi Arabia. It is one of the Five Pillars of Islam, alongside Shahadah (oath to God), Salat (prayer), Zakat (almsgiving) and Sawm (fasting of Ramadan).

As we have mentioned earlier, it is mandatory for pilgrims to register themselves with the committee for the Hajj. Registrations for Hajj 2023 will begin shortly. The citizens who are looking to register this year should know some basic things so they can ease their Pilgrimage Journey.

There has been a quota allotted to each state for Hajj Registration. If the number of registration exceeds the quota, the selection of the pilgrimage is decided after a lucky draw named “Qurrah”.

Qurrah refers to the computerized draw of lots. In the States/Union Territories where the number of Haj Applications received exceeds their quota, pilgrims shall be selected provisionally by Qurrah conducted on the Covers. The Qurrah shall be conducted by the respective State /UT Haj committees on the IHPMS software which is maintained on the server of the Haj Committee of India.

The Hajj Pilgrimage will be administered from 26 June 2023 to 30 July 2023. Millions of Pilgrims will attend Pilgrimage during this time in the city of Mecca in Saudi Arabia.

The registration of Hajj India is likely to start in April. The government and the committee of Haj will announce a schedule for the hajj Registration by releasing a circular citing all norms and guidelines of the Kingdom of Saudi Arabia. Only the citizens found eligible as per the norms of KSA will be allowed for registration.

We will publish a complete Hajj 2023 registration schedule here. We ask our readers to keep visiting this page for updates on Hajj Registration Dates.

There will be five steps to fill out the online application.

We have written a separate article on how to submit Hajj Application Form.

The Haj Committee of India makes arrangements for Haj on an Actual Cost Basis. This includes Airfare paid to the Airlines, Accommodation and Compulsory Expenses paid in KSA which include Moallim Fees, Transportation Charges, Visa Fees and other expenses.

Every year after completion of the Haj and finalization of Accounts, pilgrims are refunded the remaining balance amount to the Bank Account of the Cover Head in case of refunds.

Last Year in 2022, the expenses had raised compared to previous years. The Committee had shown a tentative table indicating the Hajj expenses. One can have a rough idea of the cost of Hajj 2023 here. 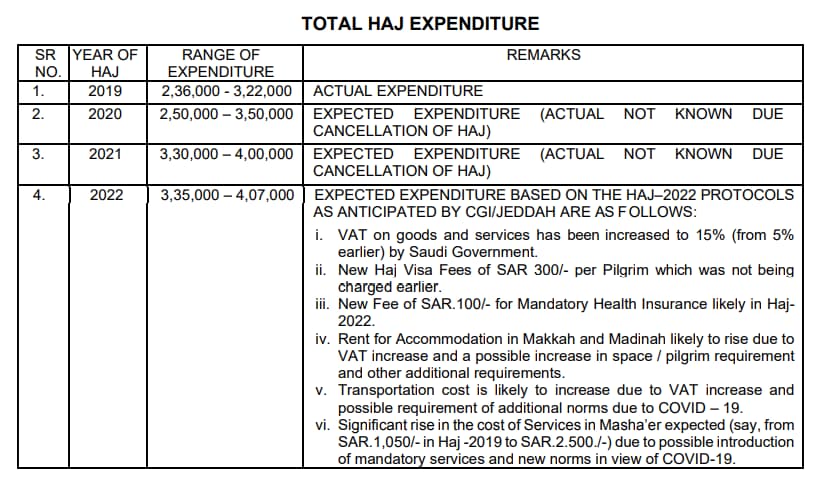 The final cost may differ this year as the KSA is expected to give some relaxation VAT.